The Australian Gold Florin coin offers you the opportunity to own a piece of history. The first Florin was issued by Edward III in 1344. Though the design today is quite different from the coin's original appearance, knowing that its history traces back nearly 700 years is quite impressive.

However, before you click "add to cart" or reach out to a precious metals dealer, take just a few minutes to learn more about the history, value, design, and other important details for this coin. Then, you'll have all the knowledge necessary to decide whether you're ready to add some to your IRA or purchase them as a personal investment.

Australian Gold Florin at a Glance

History of the Australian Gold Florin

While the first Australian Florin wasn't minted until 1910, the history of the Florin dates back much farther than this, all the way to England in the 1300s. Edward III, the King of England at the time, issued the first Florin in 1344. In fact, when Australia minted its first Florin in 1910, they matched the weight and size of the United Kingdom Florins.

Australia's original Florin has a 24-pence face value and were all originally minted using silver. The silver content of the coin was .925 between 1910 and 1945 and 50% between 1946 and 1963. The weight of these original Australian Florins was about 1/3-ounce.

Australia was planning to move to decimalization in 1966. This means, that they would no longer being using their current currencies of pounds, shillings and pence, which were confusing to convert and track. Rather, they were planning to switch to the Australian Dollar, a more practical decimal currency.

To prepare for this major change, the last Australian Florin was minted in 1963. However, the Perth Mint just recently (2021) issued updated versions of the Australian Florin in gold and silver. The new gold Florin has a face value of $25 Australian dollars.

As shared above, the new version of the Australian Gold Florin was minted in 2021 by The Perth Mint in Australia. It is a ¼-ounce .9999 fine gold coin. In other words, this coin is made using 99.99% gold.

What a beautiful coin the Australian Gold Florin is. In the next few sections, we'll elaborate more on the obverse and reverse design of this work of art.

The obverse design of the Australian Gold Florin is a portrait of Queen Elizabeth II. This famous "fifth portrait" by Jody Clark, which may also be referred to as "the new definitive Britannia" shows Her Royal Majesty wearing Diamond Jubilee earrings and the King George IV diadem. The circular border around the portrait of the Queen says: Elizabeth II Australia across the top and displays the date, weight/purity (1/4 oz .9999 Au) and face value ($25 Australian Dollars).

The reverse side of the Australian Gold Florin sets out to commemorate the design of the first Australian Florins. It depicts the coat of arms of Australia (between 1908 and 1912) with a kangaroo and an emu holding up the shield with the Cross of St. George. Five stars, each with six points, are on the shield.

These five stars represent the five Australian states. The star of Federation, a seven-point star, shines above the coat of arms, while "Advance Australia" is written on a banner beneath the coat of arms. Additionally, the date 1910 (the first minting of the original Australian Florin) is also stamped on the back.

How Much Is an Australian Gold Florin Worth?

The price of gold coins is dependent on the daily spot price of gold. An Australian Gold Florin weighs ¼-ounce, so its value should be approximately a fourth of the spot price for 1 ounce of gold. However, to receive the most current and accurate pricing information, you should reach out to a precious metals dealer. 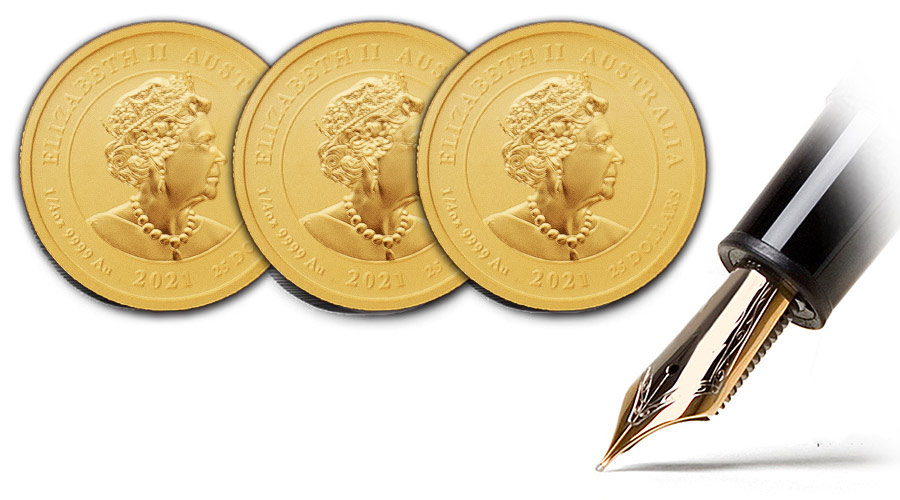 Australian Gold Florins are 99.99% pure gold. IRS regulations state that gold coins and bars must be at least 99.5% pure to be held in a Precious Metals IRA. Since the Australian Gold Florin meets these requirements, you will be able to add it to a retirement account, if you desire.

If you're just hearing about Precious Metals IRAs or haven't set one up yet, they offer an amazing opportunity to diversify your portfolio by holding gold, silver, and other precious metals in a retirement account. Additionally, you'll also receive the tax benefits that other IRA holders receive, making a Gold IRA even more appealing.

Should I invest in Australian Gold Florins?

Australian Gold Florins can make a good investment. They have a very high purity level, feature an attractive design, and have a unique story to tell. With their ¼-ounce size, Australian Gold Florins are also less expensive than many other gold coins, which may be appealing if you are just starting out and don't have a lot of money to invest.

Do you think you're ready to buy some Australian Gold Florins, either as a personal investment or to add to your retirement account?