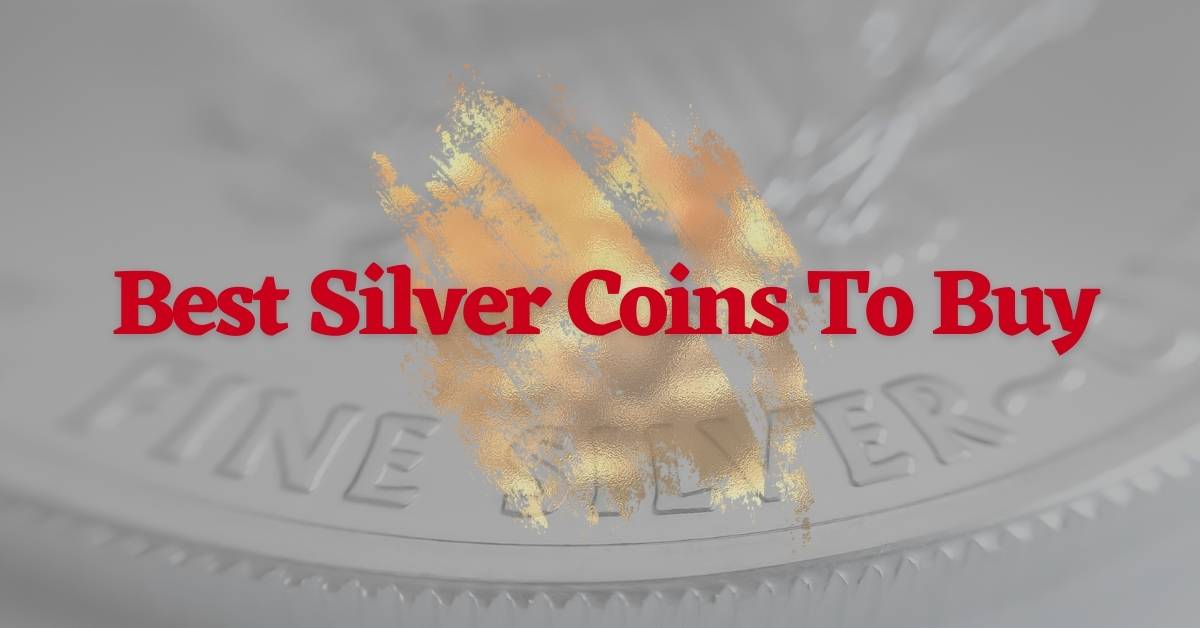 Diversifying your portfolio by investing in gold and silver coins and bars is one of the best ways to protect your financial future. Silver coins offer an amazing opportunity to investors. Whether you're only looking to purchase a few silver coins or want to add to your stockpile, you are making a wise decision.

If you've started shopping around, you probably already know that there are so many different silver coins to choose from. Countless government mints offer silver coins, plus there are many private mints that make their own silver coins. Deciding which coins to invest in is not an easy decision.

That's exactly why we're here today. We're going to give you more information about each of the best silver coins to help you decide which ones you'll want to add to your investment portfolio. If you're looking to purchase silver coins for a personal investment or want to add some to a Silver IRA, you'll find plenty of excellent options in the next few sections.

Our top recommended precious metals provider is currently offering up to $10,000 In FREE Silver!

This is our top recommended precious metals provider after reviewing over 100 of the most popular companies.

Why Invest in Silver Coins?

Before we get into discussing which silver coins are the best for investors, let's take just a moment to discuss some of the reasons why investing in silver coins is a smart idea. 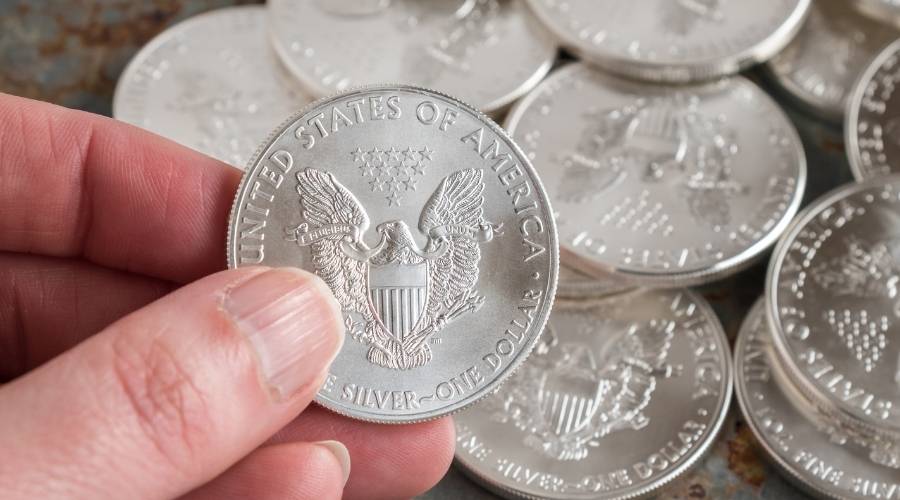 Easy to Purchase and Liquidate

Silver coins and very easy to purchase. When you're ready to sell them, you should also be able to find a buyer with no trouble. When you compare this to other investment opportunities, such as real estate, you can see that investing in silver can be a safer and less worrisome option.

Compared to silver bars, the value of a silver coin can be greater than the spot price of silver. This is because the various coin designs, rarity, and other factors can make them more of a collectible item. This means, that when you go to liquidate your silver coins, you could make a premium over what you initially paid for them.

Helps to Balance Your Portfolio 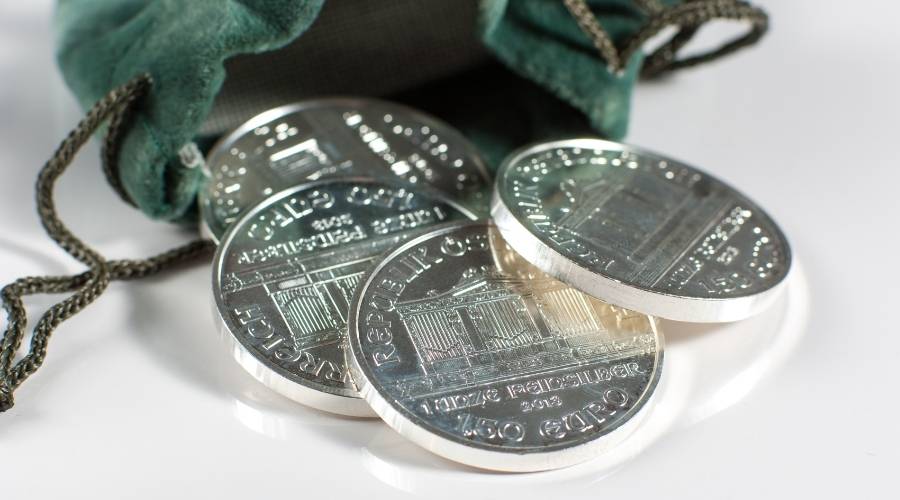 As long as silver coins are stored properly, you don't need to worry about maintenance or upkeep. Again, this is a big contrast to real estate, which requires very regular maintenance.

Again, unlike real estate, you won't need to worry about your silver coins deteriorating as they age. Even with regular maintenance, real estate properties will still show their age. And, as they age, they're going to need a lot more of your time and money to keep them in good condition to rent. This is not the case with silver coins. They'll remain in pristine condition so long as they are stored in a safety deposit box, a vault, or some other secure location.

Easy to Transfer to Future Generations

Transferring your silver coins to your heirs or others in your family won't be complicated. You can choose to divvy them up over time, or write it out in your will how you would like them to be split up following your passing. This will be much simpler, and erase the potential headaches for your heirs of trying to sell property and divvy up the proceeds.

Let's take a look at the best silver coins for investors. Here are some of our top picks that would make a great addition to your portfolio.

One of the most popular silver coins is the American Silver Eagle Coin. These silver coins are produced by the United States Mint, and, thus, come with a guarantee from the United States government for their content, weight, and purity levels. American Silver Eagle coins are 1-ounce coins with a .999 fine purity level. They have a face value of $1, though they are clearly worth more than this.

The first American Eagle Coins were minted in 1986. While the obverse, or front, design of the coin looks much as it did nearly 40 years ago with Lady Liberty, the reverse design was recently updated for the coin's 35th anniversary. Today, the reverse depicts an eagle bringing an oak branch in its talons to finish his nest.

The Royal Canadian Mint is one of the most-trusted and well-respected government mints. Their gold and silver coins are beyond compare, with stunning images and high purity levels. The Canadian Maple Leaf is their most recognized and coveted coin. This 1-ounch coin has a .999 fine purity level with a 5 Canadian dollar face value.

The reverse of the coin shows the iconic Canadian Maple Leaf design, with the obverse depicting an image of Queen Elizabeth II of England.

You may also see Austrian Silver Philharmonic coins referred to as silver Phils. The obverse coin was designed to depict the Musikverein, the concert hall of the renowned Vienna Philharmonic. The reverse of the coin continues with the concert hall theme and depicts a cello, four violins, a bassoon, a French horn, and a harp.

This 1-ounce coin is .999 fine silver and has a face value of 1.50 Euros. The first Austrian Philharmonic coin was minted in 2008.

The Perth Mint started the Austrian Silver Kangaroo series in 1993. These coins have remained popular with investors as they depict such a well-known symbol of Australia: a red kangaroo. The image of the kangaroo on the coin is quite attractive, with it jumping with a starburst backdrop.

Australian Kangaroo Silver coins have a face value of 1 Australian dollar. With a .9999 fine silver purity level, they are among the finest silver coins out there, and will make a wonderful addition to any investment portfolio.

While the obverse image of the Temple of Heaven in Beijing remains constant, a different panda image if depicted on the reverse every year. This makes these coins perfect for collectors, especially when you consider that only a limited number of coins are minted each year.

The Silver British Britannia Coin, produced by The Royal Mint in the UK, is also quite popular with investors. This 1-ounce, .999 fine silver coin, has been in production since 1987. The obverse of the coin shows a portrait of Queen Elizabeth II, with the obverse showing a horse-drawn chariot with standing Britannia.

The first Mexican Silver Libertad coin was released in 1982. The obverse of the coin shows Mexico's coat of arms, along with a Mexican golden eagle eating a rattlesnake while perching on a prickly pear cactus. The reverse design shows the winged Victoria Angel of Independence in front of Popocatépetl and Iztaccihuatl, two volcanoes.

Morgan Silver Dollars are among the most popular coins for investors. These collectible coins were produced between 1878 and 1904 and in 1921, making all of them over 100 years old now. While the coins are only 90% silver, that doesn't stop them from selling just over the spot price of silver. And, some Morgan Silver Dollars can even sell for a good deal over the spot price.

However, keep in mind that because the purity level is lower than 99.9% silver, Morgan Silver Dollars cannot be held in a retirement account.

Once the United States Mint stop minting Morgan Silver Dollars, it began minting Peace Silver Dollars. These coins, which were circulated between 1921 and 1928 and 1934 and 1935, celebrated the prevalence of the United States in World War I. For the first year of their minting, a high relieve design was used. However, the relief was lowered to prevent too much wear on the coins.

The obverse of a Peace Silver Dollar shows Lady Liberty wearing a gorgeous crown. Her hair is flowing beautifully behind her. The reverse image shows a bald eagle on a mountain. An olive branch sits below the eagle's feet.

Walking Liberty coins, which were minted from 1916 to 1947, are fondly referred to as "Walkers" by coin enthusiasts and collectors. These coins depict an image of Walking Liberty on the obverse, with a bald eagle on the reverse.

Some Walking Liberty Coins are worth significantly more than the spot price of gold. Coins minted before 1933 are much harder to find, and will bring in a pretty penny. On the other hand, coins minted after 1933 are not as difficult to find. They are still valuable, however, and will typically sell for about the spot price of silver.

You can also consider adding silver dimes to your investment portfolio. Silver dimes, which contain 90% silver, were minted by the United States Mint through 1965. You may seem silver dimes referred to a "junk silver." This term means that the value of the dimes lies solely in their silver content.

There are three different silver dimes you may find: Barber, Mercury, and Roosevelt. Each name refers to the different designs that were used for the dimes for the period when they were minted.

As a note, the Roosevelt Silver Dimes have the same design as the dimes currently minted by the US Mint. However, after 1964, silver was no longer used to mint these coins. 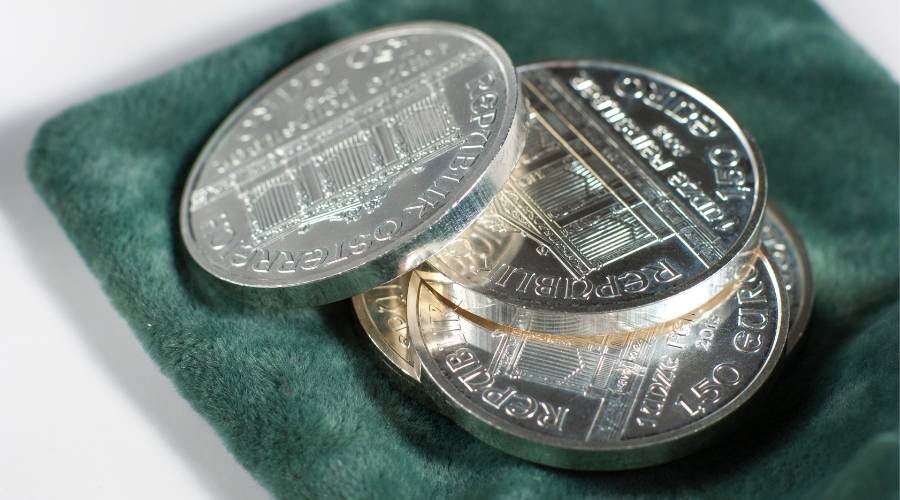 Before you purchase any silver coins, read through the next few sections. We've outlined some important things to consider when shopping for silver coins. Keeping these factors in mind as you shop can help ensure that you make the right purchases.

The first thing you want to consider when shopping for silver coins is their purity level. Not only can this impact their overall value now and when you decide to resell them, but it is also important if you're shopping for coins for a silver IRA.

IRS regulations state that silver coins must be at least 99.9% pure to be held in a retirement account. So, some of the older silver coins, such as the Morgan Silver Dollar or Peace Silver Dollar, would not be viable choices for a Silver IRA. These two coins are only 90% silver (with the other 10% being copper).

Most of the newly minted silver coins from world mints do meet the purity levels set forth by the IRS and can be held in a Silver IRA. However, it is still always a good idea to confirm before making a purchase.

Another important consideration is the mint where the coins come from. There are quite a few government and private mints that offer silver coins, so if you have any preferences you will want to pay attention as you shop. You can always check for information about the mint's reputation before making a purchase.

Finally, depending on your reasons for investing, you may also want to pay attention to the various silver coin design options. While the designs may or may not have a significant impact on the future value of the coin, some may be more appealing to you. And, after all, it is your money that you're spending, so you may as well choose something that you like.

There are many options when it comes to purchasing silver coins. Hopefully this article will serve a guide to help you select the best silver coins to add to your personal or retirement portfolio. Which silver coins are catching your eye?

Although, we have already done this work for you!

You can get a free investment kit & benefit from major bonuses currently being offered (like up to $10,000 in free silver)!