Bullion Star’s headquarters are in central Singapore. The company is unique globally and offers a secure vault, showroom, and walk-in bullion shop. Many of the reasons why Bullion Star chose their location to be in Singapore is because it has one of if not the most business-friendly and stable jurisdictions internationally.

Precious metals sold at investment grade at Bullion Star are free from Singapore’s GST tax. International customers rave over the online platform for transactions because it is easy to use. Bullion Star offers groundbreaking research that covers precious metal markets worldwide.

On Bullion Star’s website, customers control all of their holdings and can buy and trade precious metals using Bitcoin and six primary currencies. Bullion Star also lets its customers keep funds in an account.

Bullion Star was established in 2012 and is a premier bullion dealer in Singapore. Not only do they do business regionally and locally, but they also have a solid customer base internationally. They offer investment-grade silver coins, silver bars, gold coins, and gold bars from prestigious mints and refineries specializing in precious metals.

Metals stored in the vault get audited and are fully insured. Bullion Star gives its vault customers online access to their holdings.

See if Bullion Star made it on our list this year!

Or continue on with this Bullion Star review...

The services and products Bullion Star offers are:

Bullion Star’s gold bars have no spread between the sell and buy price. Argor-Heraeus produced these uniquely minted gold bars, and they are 99.99% pure.

Metalor is a leading supplier in precious metals and is an international Swiss-based company whose refinery is near the Canton of Neuchatel in Marin-Epagnier, the northwest of Switzerland. These bars are also 99.99% pure.

Argor-Heraeus is a member of the LBMA (London Bullion Market Association) and offers various sizes of 99.99% pure gold bars. Gold bars weighing over 100-grams are casted while the bars weighing up to 100-grams are laminated and extruded in an assay card.

PAMP gold bars have the Statue of Liberty, Rose, or famous Lady Fortuna design. PAMP has its headquarters in Castel San Pietro in southeastern Switzerland, not far from Chiasso. PAMP is the largest manufacturer of minted bars globally and has one of the leading international gold refineries.

Heraeus is well-established and has been doing business for over 160 years. Each bar has at least 99.99% of gold. These bars are of the highest German quality.

A kinebar contains a Kinegram to prove that it is authentic. It is used both for visual appeal and as a security feature for these gold bars. Each gold bar has a minimum of .9999 gold, and is laminated and extruded in an essay card. The packaging varies from each gold bar, and they may or may not have a certificate.

The Royal Canadian Mint produces Canadian Gold Maples. They have been made since 1979 and are one of the top purist coins in the world. Gold Maple features Queen Elizabeth II on the front and an image of a maple leaf on the back.

In 1986 the Gold Nugget was introduced by the Gold Corp. The government in Western Australia owned this company outright. Since 1996 Perth Mint has produced Gold Kangaroos. Each year the motif of the coins changes giving them higher value.

American Gold Buffalos are coins minted by the United States and guaranteed by the US government to contain the actual gold weight in troy ounces. The Gold Buffalos is the only legal tender coin in America with a value of USD 50.

The Chinese state has produced gold Pandas since 1982. The mint size of these coins are:

The Royal Mint mints the Gold Queen’s Beast series. It’s a set of 10 coins and is newly released. Each coin gets minted in 99.99% fine gold.

The Mexican Libertad gets produced in denominations of 1/20 oz, 1/10 oz, ¼ oz, ½ oz, and 1 oz by the Casa De Moneda, the national mint of Mexico. On the front of the Mexican Libertad is Mexico’s coat of arms, and on the back is an Angel with volcanoes.

Established in 1967, the Nadir Refinery was the first Turkish refinery to become a member of the LBMA in 2012.

Although these bars do not come with a certificate or serial number, the Western Australian government guarantees their legal purity and weight.

Valcambi was found it in 1961 and is Switzerland's most famous refinery.

Founded in 1861, Johnson Matthey was one of the most famous refiners in the world.

The Australian Mint produces these coins, and they are the first coin to be denominated in Euros. Australian Silver Philharmonics are the only pure coin minted based on demand for investments.

Britannia is the ruler of the seas, warrior queen, and watchful guardian. This coin, with its rich history, is a favorite amongst investors since its introduction in 1997.

Since 2007, Perth Mint has produced the Australian Silver Koalas Series. Each year, a newly released koala design is on the coins.

Traditionally Chinese Dragons symbolize suspicious and potent powers. Dragons are also a symbol of good luck, power, control, and strength. Because of the high demand for the Australia Lunar Series, it is nearly impossible to find these coins available.

When it comes to a comprehensive solution for storing, selling, and buying bullion, Bullion Star’s storage service is first class. Twenty-four hours a day, seven days a week, you have control of your bullion in a vault in Singapore. The vault, made of reinforced concrete and steel bars, is protected by surveillance and security features.

Bullion Star’s vault, located in its retail shop, is in the middle of Singapore. To physically audit or withdraw your bullion, you make an appointment and walk in. The best vault and storage features are:

Selling Your Gold To Bullion Stars 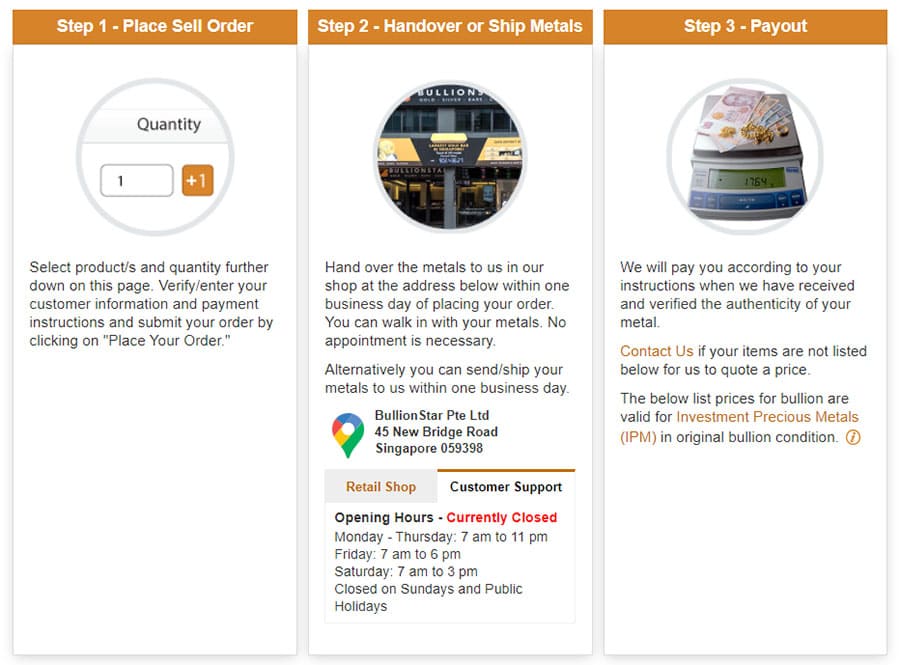 Bullion Star’s has an online page where you can sell gold to them that you already have. To do so, you have to initiate shipping your bullion to Bullion Star in Singapore in one business day. Selling your bullion is a simple three-step process.

Step one is placing a sell order. You select the number of products, verify your information and payment, and click the tab to place your order. Step two is handing over or shipping your precious metals. As stated before, you can hand over your metals to the shop in Singapore after one business day of placing your order.

You can walk into the shop, and no appointment is needed, or ship your precious metals there. Step three is your payout. Bullion Star’s pays you once your metals reach Singapore and their authenticity is verified.

Once you have filled out your payment and customer information, you will need to agree to the terms and conditions before placing your order.

Is Bullion Star A Scam?

These ratings are essential for businesses. Although Bullion Star lacks the reviews from these prominent websites, the company is not a scam. They are legitimate and provide excellent products and services.

Pros And Cons Of Bullion Star

Although we do think that Bullion Star is a solid company, we believe that there are better companies out there to make your investment with.

Or, continue with Bullion Star...