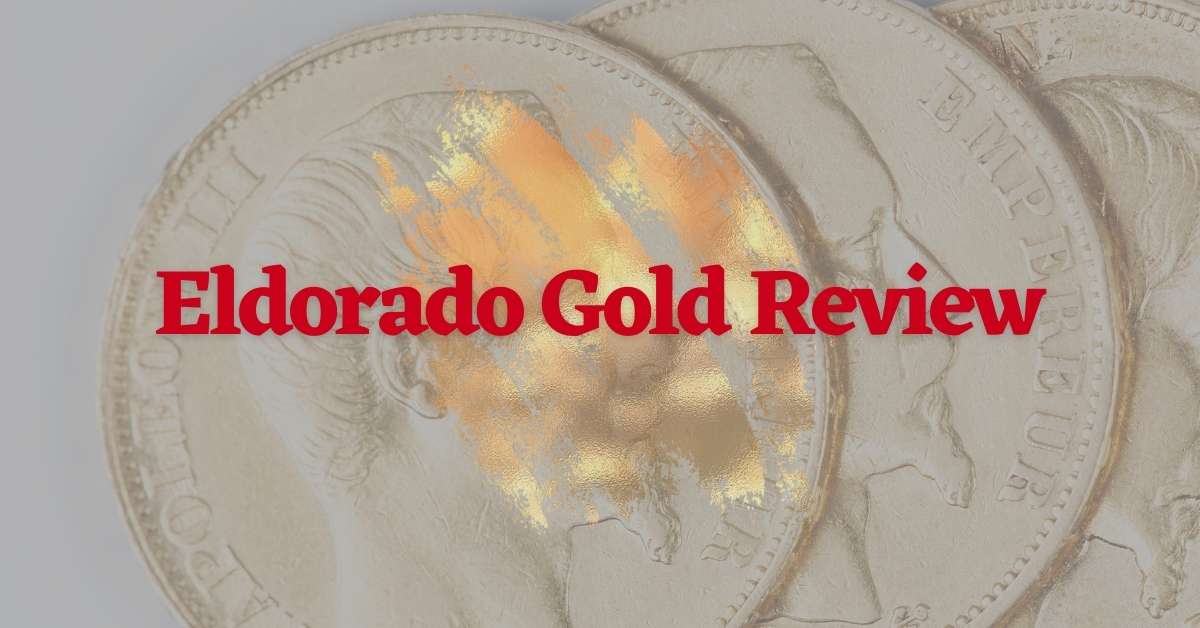 What Is Eldorado Corporation?

The Eldorado Gold Corporation is a gold-producing company located in Turkey, Greece, and Canada. It also produces base metals and has over 25 years of experience developing and operating mines in Europe, America, and Asia. It has a major principle of responsibly extracting minerals.

The Eldorado Gold Company is found in Canada and owns and runs gold mines in Canada, Greece, and Turkey. When the company merged with European Goldfields in 2011, it started pursuing the development of mines in Greece, such as Olympias mine, Stratoni mine, and Skouries mine.

Before, Eldorado Gold grew and ran gold mines in Mexico, China, and Brazil. The headquarters of Eldorado Gold is in Vancouver, and it is listed on the New York and Toronto stock exchanges. The company has built and operated assets from multiple merged companies like European Goldfields, African Mining Corporation, HRC Developments Corporation, Integra Gold, Brazauro Resources, and Sino Gold Mining.

Eldorado Gold maintains high standard levels of safety for its employees, intending to avoid unprecedented lawsuits that may cause denting its finances. All the activities in the company meet the environmental standards through how waste materials are disposed of. 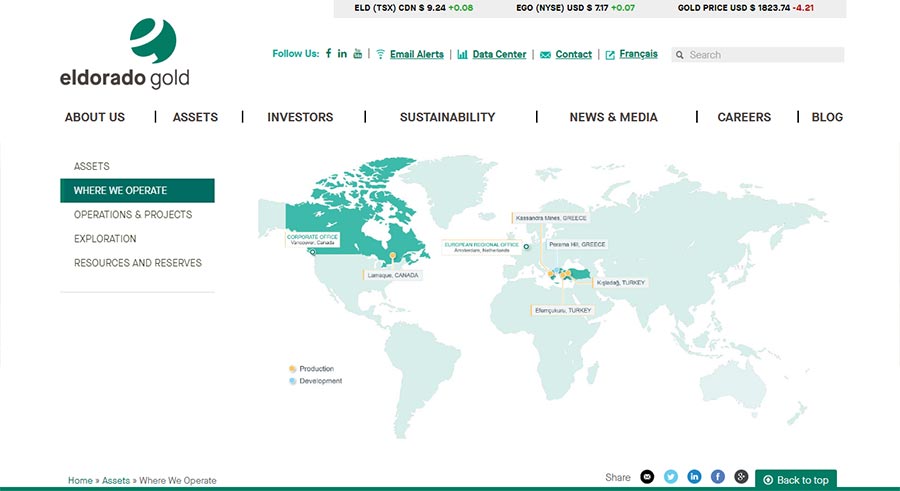 The company's operations spin in three global regions. It uses a diversification approach to its operations to ensure that solid cash flow is not stopped at any point. At the moment, Eldorado Gold runs the following mines:

Currently, the company is working on expanding its presence in the Lamaque region which is expected to have more gold reserves. The company's portfolio is strengthened by its adjustable development alternatives in multiple development projects. It invests in highly prospective areas that are under-explored and have promising organic growth and high-quality assets.

The Products Offered in Eldorado Gold 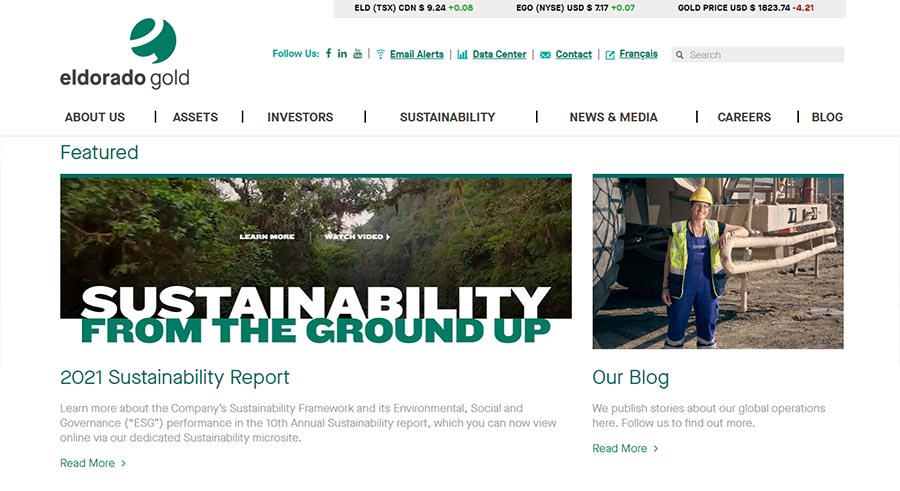 The mid-tier gold producer company mines gold and base metals. However, it is primarily focused on gold production. You can see the evidence through the exclusive data presentation on gold mining operations on the company's official website. For instance, in 2018, it produced about 350,000 ounces of gold.

Apart from producing gold, Eldorado Gold offers stocks for shareholders to buy of their free will as long as they purchase legally. The publicly listed company has stocks in trade exchanges such as:

The Corporate History Of Eldorado Gold

The company was incorporated by some entrepreneurs who were workers of Bema Gold on April 2nd, 1992, in Bermuda. The group of the Bema Gold workers had agreed on a contract that would offer them the interest of 70% in the Mexican La Colorada if they could turn the mine into commercial production. La Colorada was the first productive mine of Eldorado Gold in the early part of 1994, and at the end of that year, the remaining interest was purchased.

At the same time, the group also fulfilled a similar contract to conduct work related to development in exchange for the La Trinidad project's ownership interest, also found in Mexico. The mining production started in 1996, but Eldorado Gold gained full ownership in 1997.

When the price of gold collapsed, La Trinidad was shut down and sold off in 1998. It was the same fate for La Colorada in 2000. The company was renamed Eldorado Gold Corporation in April 1996 after defending a takeover bid by Glamis Gold, and its domicile moved to British Columbia in Vancouver.

The company acquired in the same year exploration properties in Turkey and Brazil, and the Brazilian Sao Bento. Sao Bento became the company's only operating mine between the years 2000 and 2006 while it concentrated on building the Kisladag project in Turkey.

The gold production of Eldorado Gold increased from the 2005's 64 298 ounces to 632,539 in 2010. This is despite Sao Bento being closed down in 2007. Eldorado acquired an all-stock deal in 2010 worth 122 million dollars. Eldorado, later on, offered a 3.4 billion dollars to an all-stock deal with the aim of acquiring ASX-listed Andean Resources for their project called Cerro Negro project.

However, they were outbid by Goldcorp, who offered a total of 3.6 billion dollars in stocks and cash. Eldorado decided on acquiring TSX-listed European Goldfields for 2.5 billion dollars in stocks of their Greece projects and exploration properties in Romania. The gold production of Eldorado peaked in 2014 at 789,224 ounces from its mines in China, the Kisladag mine, and the Efemcukuru mine.

Is Eldorado Gold A Genuine Company? 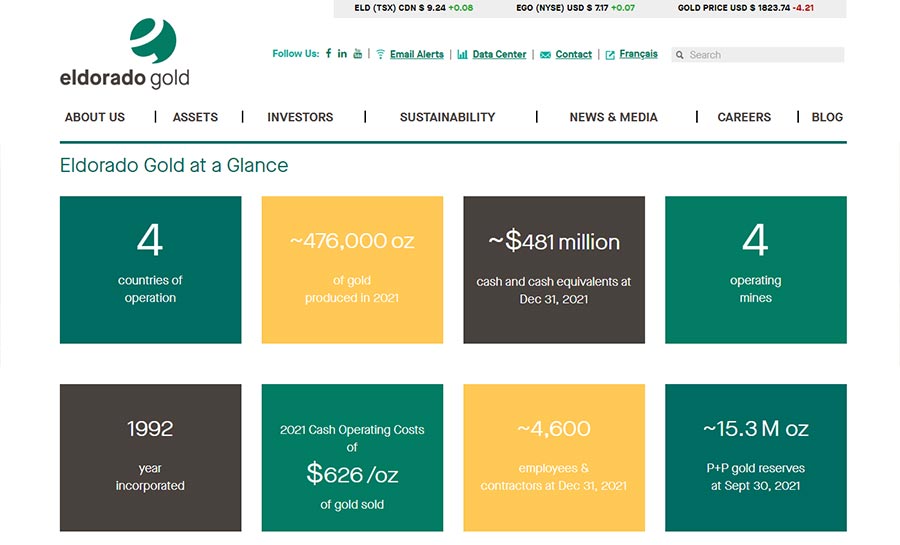 The Eldorado Gold company is a genuine company, and it provides genuine products. Its activities, such as exploration, development, and mining, are distributed among six nations with different jurisdictions. Operating the company in a total of six countries means that if it was running illegal activities, it would have been spotted, and its activities shut down.

The company's top directors whose information you can easily find all over the internet. The notable figures are such as:

The annual revenue of Eldorado Gold falls in the category of millions. Therefore, it would be difficult for such a large company to conduct activities and operations without them being noticed.

The company has its doors open for investors that feel they have the needed capital to buy its stocks and sell them after a well-thought period. The investors need to access the stocks listed on Toronto Stocks Exchange and New York Stocks Exchange and buy them with the anticipation that the price will also go up as time goes by.

It is wise to compare a company's positive and negative sides to help you get a better perspective and overall view of the company. Therefore, the pros and cons of Eldorado Gold Corporate are such as:

The Eldorado Gold company is a legit company for sure. The company is reviewed by most of its clients and employees to have good interaction with humans and treat everyone with respect and with quality products; and also it has a fast delivery service.

However, before deciding if you wish to invest in Eldorado Gold corporate, you should conduct all the necessary research to help you with an overview of the company.

You can also see our list of the best gold IRA companies to compare.