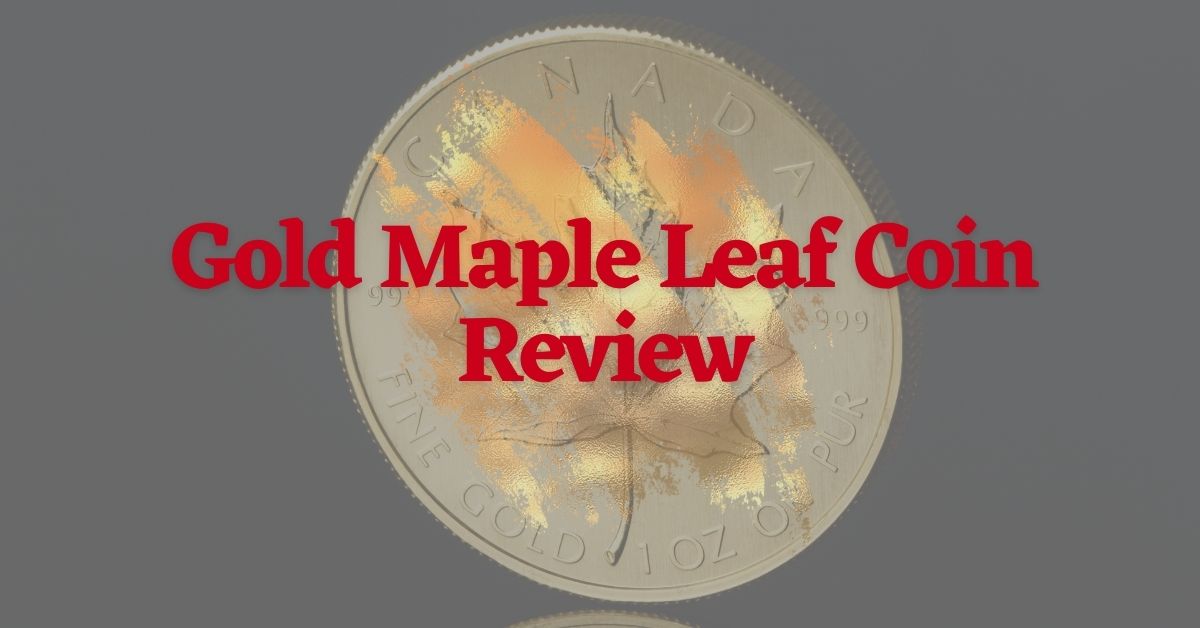 The Gold Maple Leaf bears the iconic symbol of Canada. While this coin may be produced in Canada, it is popular around the world and is selected by many investors purchasing gold for a personal investment as well as those adding gold to a Precious Metals IRA. The Gold Maple Leaf Coin was first minted in 1979 by the Royal Canadian Mint.

With a purity level of at least .9999 up to .99999, the Gold Maple Leaf Coin is one of the purest gold coins you can find. It is available in multiple sizes and denominations.

If you're looking to learn more about the Gold Maple Leaf Coin to decide if you'd like to add it to your investment portfolio or a Gold IRA, keep reading. We'll share important details about the coin itself as well as a little of its history.

Now, those values listed above are just the face value of the coin. This means if someone were to use the coin in a Canadian store, this is how much it would be worth. But, given the value of gold, Gold Maple Leaf Coins are not used as legal tender, rather individuals purchase them for a collection or as an investment.

Since the value of the coin is tied to the current price of gold, it fluctuates as the value of gold increases or decreases. It should also make sense that the 1-ounce Gold Maple Coin will have the greatest value, and the other sizes will be proportionally related to the price of gold.

The Gold Maple Leaf Coin is one of the most easily recognized gold coins. The front (or obverse) of the coin shows a profile image of Queen Elizabeth II. In this image, Queen Elizabeth Is not wearing her crown. This image was designed by Susanna Blunt.

The words "Elizabeth II" are written above the Queen's head, and "50 Dollars" (for the 1-ounce coin) and the minting year are written across the bottom of the coin.

The coin's reverse side is where you'll find the classic Canadian Maple Leaf. "Canada" is written across the top of the coin, "Fine Gold 1 Oz Pur" (for the 1-ounce coin) are written across the bottom. "9999" is stamped on either side of the maple lead.

One decision you'll need to make before purchasing a Gold Maple Leaf Coin is to decide whether you would like a bullion coin or a proof coin. Each of these coin types feature a slightly different method of production.

To create a proof Gold Maple Leaf Coin, the unstamped, blank coin is fed into the press by hand. The coin is struck multiple times, yielding a highly detailed and intricate image. This is the main visible difference between proof coins and bullion coins: proof coins will look clearer and have more pronounced markings.

Proof coins are assigned a score between 1 and 70. These scores, based on the Sheldon Scale, rate the coin's appearance and quality. A score of 70 indicates a perfect proof coin, while a score of 1 would indicate a proof with horrible quality.

Canada only starting minting its own gold coins in 1908. The Royal Mint's Ottawa Branch's first gold coin was a gold sovereign stamped with a letter C to stand for Canada. Not long after this first coin was struck, Canada began in-house gold refining.

And, just four years after that first coin was struck, the Canadian Department of Finance directed the mint to make 16,000 gold coins (8,000 five-dollar coins and 8,000 ten-dollar coin).

Beginning in 1979, the Royal Canadian Mint started producing gold bullion. The Gold Maple Leaf Coin was the first coin minted. The original coins minted has a $50 (CAD) face value and were 99.9% pure. It didn't take long for the world to take note of this coin, and the Gold Maple Leaf Coin quickly gained popularity across the globe.

Since that first Gold Maple Leaf Coin was struck in 1979, the Royal Canadian Mint has grown to be not only one of the most trusted refineries for gold and silver in the world, but also one of the most advanced. They were the first to produce gold bullion coins with a 99.99% purity level in 1982, and in 2007 were the first to produce a 99.999% pure gold bullion coin. To this date, not other mints have been able to create coins with this level of purity.

As a special piece, the Royal Canadian Mint produced six very special Gold Maple Leaf Coins. These coins were significantly larger than any of the other Gold Maple Leaf Coin sizes with a 50-centimeter diameter and a thickness of 3 centimeters. Each coin had a purity level of 99.999% and weighted 100 kilograms.

As you can probably guess based on the size and weight of these coins, they were extremely valuable. Each coin had a $1 million face value with the value of the gold being over $3.5 million!

One of the coins that was in the Bode Museum in Berlin was stolen in 2017. The coin has still not been recovered, and it was likely melted down and sold. 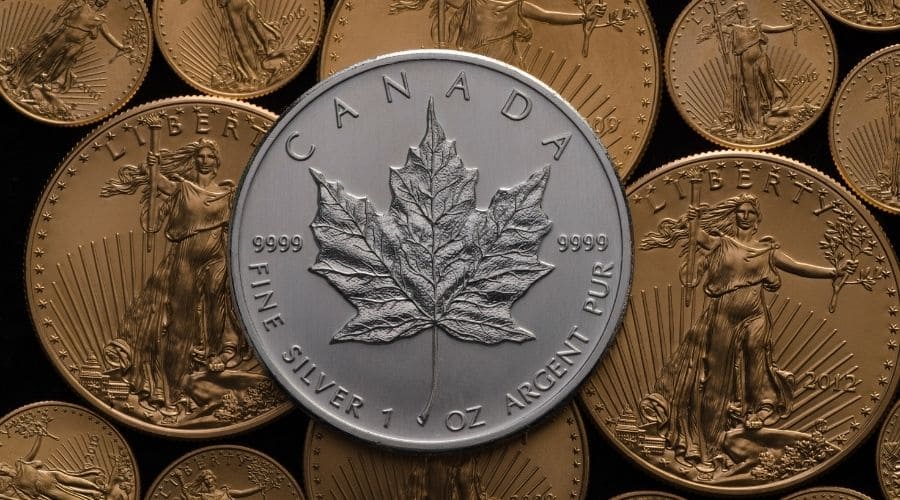 Ready to start investing in Gold Maple Leaf Coins? That's not surprising, knowing what a good investment these coins are and how popular they are!

One of the best ways to invest in Gold Maple Leaf Coins is to set up a new Precious Metals IRA. With a Precious Metals IRA, also called a Gold IRA, you can hold precious metals rather than traditional stocks and bonds in your retirement account. This can help you make sure you're ready for retirement when the time comes and offer protection against stock market volatility.

If you already have an existing retirement account, it may even be eligible for an IRA rollover. If you're not sure whether your existing account is eligible, you can reach out to a gold investment company to learn more.

They can ship your Gold Maple Leaf Coins directly to you, and most companies offer free shipping and free transit insurance to ensure your coins make it to you without issue.

Purchasing Gold Maple Leaf Coins from a coin shop in your area is another option. This will allow you to see the coins in person, but you may end up paying more for the coin than you'll pay online. Purchasing from a coin shop also isn't as discreet as purchasing online.

Regardless of how you get your Gold Maple Leaf Coins, be sure to arrange for secure storage. This could mean storing the coins in a safe deposit box of a nearby bank, or it may mean finding a company that specializes in segregated storage of precious metals.

If you purchase Gold Maple Leaf Coins for an IRA, they will need to be stored in an IRS-approved depository. Since all of these depositories feature excellent security, you won't need to worry about anything happening to your investment.

What is a Gold Canadian Maple Leaf Coin worth?

The value of a Gold Canadian Maple Lead Coin is tied to the current price of gold, so it can fluctuate. Since there are multiple sizes and denominations of this coin, those will also affect its value.

Gold Maple Leaf Coins are recognized across the world, and should you ever want to liquidate your investment, you will have no trouble doing so.

How can you tell is a Canadian Maple Leaf Coin is real?

There are a few different things you can inspect to help you verify that a Canadian Gold Maple Leaf Coin is real and not counterfeit. One of the easiest things to do is to verify the weight. Gold Maple Leaf Coins produced by the Royal Canadian Mint should have a weight of exactly 31.1 grams. If the coin you're looking at weighs anything else, it is a fake.

Gold Maple Leaf Coins produced since 2013 should also have a very small maple leaf engraved with a laser on the back side. This can only be viewed using magnification.

If you are unsure whether a Gold Maple Leaf Coin is real or counterfeit, it is advisable to bring it to a trusted coin shop or grader. If you're purchasing it from someone who doesn't want to do this, it should be a red flag that the coin may be counterfeit. Purchasing coins from a reputable dealer or online precious metals investment company is also a good idea.

How do I sell my Gold Maple Leaf Coins?

If you have Gold Maple Leaf Coins that you want to sell, you can look for an online dealer that purchases coins. You may also be able to sell your coins to a local coin shop or find a private buyer in your area.

Before selling your Gold Maple Leaf Coin, be sure to do research to find the current price of gold and current value of the coin to avoid getting ripped off.

Can you hold a Canadian Gold Maple Coin in an IRA?

Yes, Gold Maple Coins are an IRA-approved coin. They meet the IRS' regulations of being at least 99.95% pure. In fact, the Gold Maple Coin is 99.999% pure, making it among the purest coins out there.

When was the first Gold Maple Leaf Coin minted?

Later, other denominations of the coin would be added, and the purity level would increase to 99.99% pure, and then 99.999% pure.

What is the $1 million Gold Canadian Maple Leaf Coin?

The $1 million Gold Canadian Maple Leaf Coin was a special coin minted in 2007. Only six of these large coins were made. Each coin had a diameter of 50 centimeters, a thickness of 3 centimeters, and a mass of 100 kilograms. The coins were made of 99.999% gold, so despite their $1 million face value, at the time they were produced each coin was worth more than $3.5 million dollars.

One of these special gold coins was being displayed in the Berlin Bode Museum in 2017. It was stolen and never recovered. Most individuals believe that the coin was melted down so the thieves could sell the gold.