The Royal Mint Bullion is a British company that sells precious metals. They aim to appeal to a European base of customers who want to purchase locally, rather than needing to use a US company. But how do they compare to the competition? Are they actually a worthwhile company?

There are quite a few bad customer reviews that seem to say no. Unlike companies with too few reviews, this company has several hundred on Trustpilot -- and almost all of them are bad. But let's take a look at what they have to offer and determine whether the poor reviews are fair or not.

See if Royal Mint Bullion made it on our list this year!

Or continue on with this Royal Mint Bullion review...

About the Royal Mint Bullion 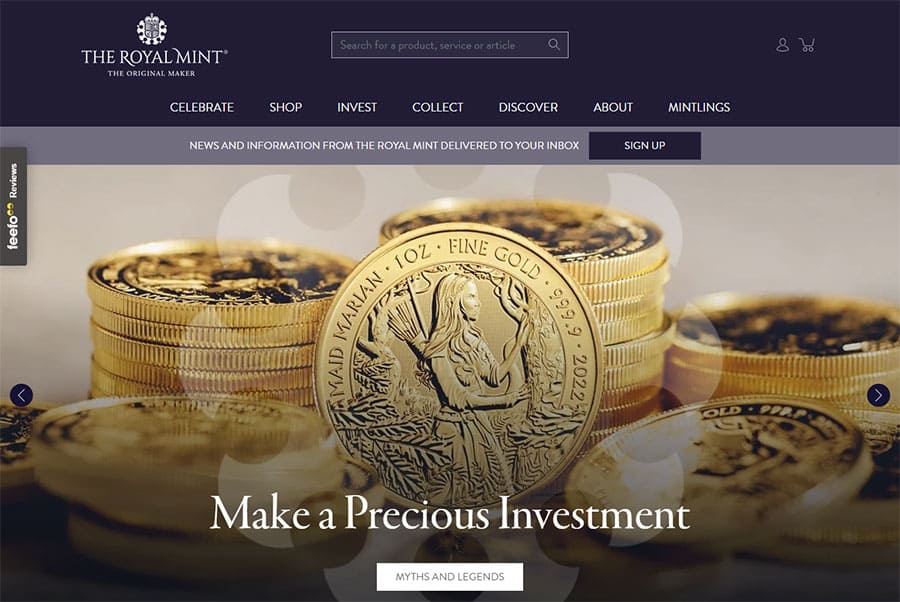 The Royal Mint Bullion is a British mint and precious metals dealership that is owned by the British government. It is supposed to be one of the leaders in the precious metals industry, due to its government backing and long history.

If you want to make an investment, you'll need to create an account. You can use the company's online marketplace to put together a shopping cart of your ideal metals.

The company offers certain services to both investors and collectors. Investors have a choice of different gold, silver, and platinum products. Collectors, on the other hand, can choose from a variety of different collectible coins.

The company's Coin Finder Service will help buyers locate the rare coins they're looking for, even if the mint itself doesn't have them. They also provide authentication services and auctions.

The Royal Mint is outfitted with secure storage options, which people can use to hold their items. You can also hold sentimental items in your vault, similar to a safety deposit box. Every box comes with an insurance policy of up to 50,000 pounds.

When you enter the site, you will have your ID checked and go through an x-ray. This helps to further secure the area. There are even fingerprint scans to make sure that no one except you can access your vault.

If you have coins to sell, the Royal Mint is interested in buying. You can use their online tool to match your coins to a knowledgeable buyer, getting a quote quickly and easily.

Though the company is mainly interested in gold and silver coins from the mint itself, especially pre-1971 ones, they are willing to purchase a variety of other coins. You just have to fill out the form to find out if they'll take yours.

Is Royal Mint Bullion a Scam?

There is absolutely no scam aspect to the Royal Mint Bullion. For a company to be a scam, it needs to operate fraudulently. This mint is owned by the British government and is legitimate in every way. It is one of the largest precious metals dealers in Europe, and many people turn to it because of its government backing.

But just because it isn't a scam doesn't mean that it's good. On Trustpilot, there are 234 reviews. A whopping 63 percent of those have just one star. That means that more than half of the company's clients report having the worst experience possible.

You definitely don't want to purchase from a company with that kind of track record.

As there are more than one hundred complaints lodged with Trustpilot, we can't get into them all. But we can take a look at what some customers have reported experiencing.

One person said that he was reluctant to write such a poor review because he has a sense of loyalty to the mint. It is a part of British history. But apparently his experience was bad enough that he no longer felt the loyalty he used to.

He purchased an annual uncirculated set of collectible coins in 2020. When the newly minted coins arrived, there was an obvious defect on one of them. The defect was visible to the naked eye and should have been clear to whoever packaged the box.

The customer called the company to report the issue. They were told that the coin could either be exchanged or refunded. When they asked if they'd be compensated for their trouble, the spokesperson told them that the company would cover the cost of shipping.

The person was not satisfied with this, since it was the company's quality control error that led to this hassle. They were upset that they would need to repackage and mail the coins without any apparent care from the company. In addition, they said that they had emailed the support team but received no response.

The Royal Mint did respond to this. They said they were sorry about the customer's dissatisfaction and added that the customer service team would be in contact with the customer.

Another review also complained about the subpar customer service. The person had made several purchases of commemorative coins and gifts before, and they'd never had an issue. So they decided they wanted to invest for themselves.

The customer added funds to their account and asked the company to change their address since they'd just moved. The company said the address change would take 24 hours. But a week later, it still wasn't done. The customer had made multiple phone calls with no response.

The customer was upset because it would take a week for their money to be refunded. They also mentioned that the company asked if they'd invest more next time, like they didn't care about smaller investors.

Another reviewer said that they couldn't recommend the mint to anyone even though they had been investing with the service for several years. Their first two years of investment didn't have any issues. But following a change in website, the customer reported major issues with their online account.

Apparently there were glitches that caused past transactions to be marked "pending," so the customer's account balance went into the negatives. All of these transactions had been paid for already. The customer said that they weren't impressed by the inconsistency of the company's internal systems and that they wanted the company to be more efficient.

This reviewer stated that it took four phone calls before they finally connected to a customer service representative who was willing to help. The rep removed the negative balance.

But then the customer received a warning email stating that their account had been inactive for four weeks, which would result in deactivation. But they'd made a purchase two weeks before. They were upset that the company was pressuring them to use the funds in their account before they were ready.

The Royal Mint replied asking for the customer's details so that the issue could be sorted out in private. Apparently the customer declined to provide them.

One business owner reported that they were upset with their purchase because the company didn't have enough transparency about the transactions. The mint's "Digi" accounts are only available to consumers, not businesses. Consumers have to pay taxes on their items, while businesses don't.

This business owner bought Digi products in order to invest in his company. But he was charged the 20 percent tax of a consumer without realizing it. He said that he didn't know that the price was marked up, and that when he wanted to sell the items back to the company, he couldn't get his money back.

The company replied to say that they were sorry the customer hadn't been given transparent information. The representative writing the reply said she'd passed the concerns onto the investment team, and they were updating the website to have better information for business owners.

The customer with the defective coin set wasn't the only one to report seriously damaged goods. Another customer reported that all of their purchased bars were shipped with major issues. They had purchased 10 ounce Lion and Una bars along with 100 ounce Brittania bars.

Like with many of the other negative reviews, the customer first tried to reach out to the support team. They sent several emails but didn't receive a reply for over a week. Since they had no information on how to do an exchange, they filed their complaint on Trustpilot.

One review came from a customer who had already taken to Trustpilot to discuss a previous error. After resolving that, he placed another order. The Royal Mint didn't seem to have fixed any of their customer service issues.

The customer purchased a 5 ounce coin in two separate transactions, received an order confirmation, and then didn't hear anything. They also made an order of a couple 2-coin sets. After ten days of radio silence, the customer received an email saying that the company didn't have any of the 2-coin sets left, so only the first set would be sent out.

While it's true that sometimes companies run out of inventory for reasons beyond their control, the real kicker was this: The header of the email was addressed to an incorrect name. The customer had never heard of that person.

Apparently the company offered this customer a free commemorative coin and a 10 percent discount. The customer was not satisfied with this solution. He was also upset that he'd encountered more problems after already having issues with the mint before.

As with the other reviews, the company did reply. The representative said she was concerned that there were new issues and that she'd gotten in contact with the company's customer service team about it.

So in these reviews, it's been established that the Royal Mint Bullion has a pattern of:

All in all, the headache isn't worth it. Remember: almost 70 percent of the people on Trustpilot gave the company the lowest marks they could.

In theory, the Royal Mint Bullion should be a great company to invest with. They are a mint owned by the British government, operating with a long global history. Several British people say they feel loyal toward it because it represents so much of British history.

But the company also seems to be stuck in the past. There are more than a hundred terrible reviews on Trustpilot, with many stating that they only wrote the complaint after being ignored by customer service. Though the company responds to each complaint, they don't seem to have changed any of their managerial practices.

Overall, we can't recommend using this company to invest. If you're looking for a European precious metals dealership, you might want to investigate the sovereign mints in other countries. There are also several private European dealerships that sell precious metals at a relatively low markup.

Although we do think that Royal Mint Bullion is a decent company, we believe that there are better companies out there to make your investment with.

Or, continue with Royal Mint Bullion...