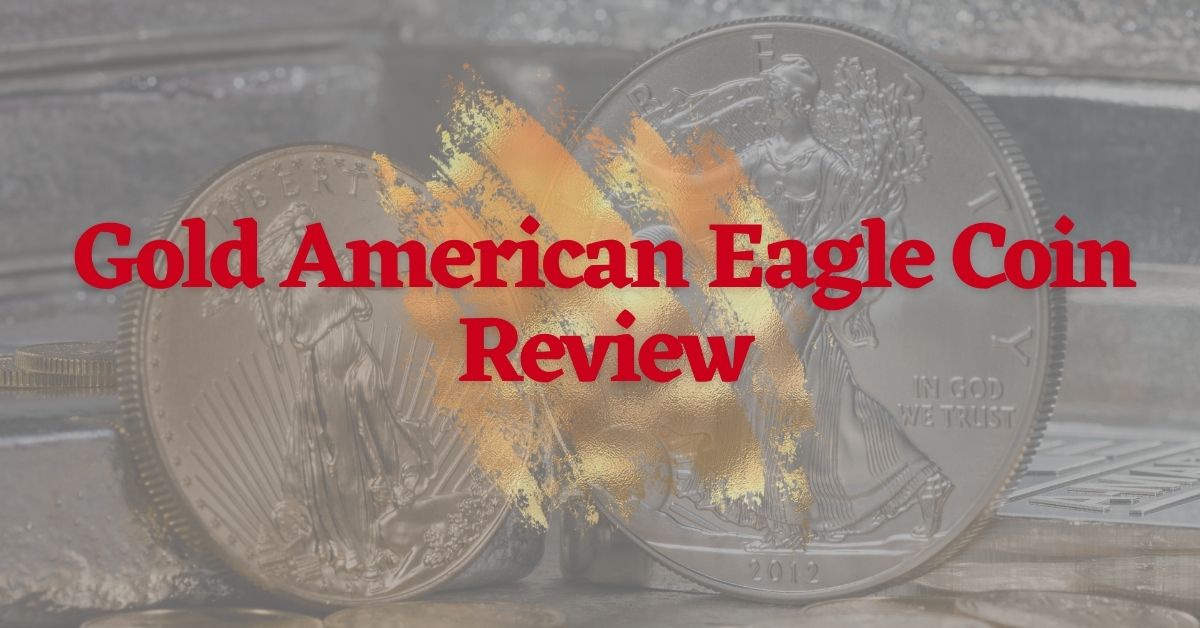 The Gold American Eagle Coin is a widely recognized and popular coin, not just in the United States, but in countries around the world. This shiny, brilliant, and beautifully-designed coin is the United States of America's official gold bullion. If you've been thinking about investing in gold, you've likely noticed that it is offered by nearly all gold dealers selling coins for both personal investments or for a Gold IRA.

But what makes this gold coin so special? Is it one you'll want to add to your investment portfolio or purchase to pass on to future generations? Continue reading to learn more about the Gold American Eagle Coin 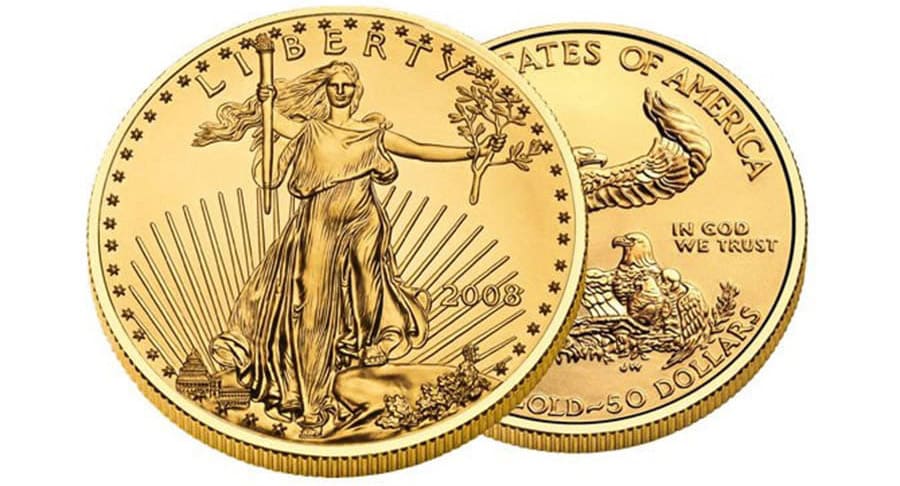 Due to this drastic difference between the face value and the intrinsic value of the Gold American Eagle Coin, you are unlikely to see their coins being used as legal tender. Rather, they are held onto as an investment, often in a Gold IRA.

While there are four different denominations of the Gold American Eagle Coin, they all feature an identical design, aside from the lower portion of the reverse side of the coin where the weight and face value are printed.

The front of the coin, referred to as the obverse, depicts Lady Liberty walking with an olive branch and a torch. She is standing in front of the large rays of the sun and has a bold and fearless presence. An image of the United States Capital sits to the left of Lady Liberty, and starts encircle the design around the perimeter of the coin. "Liberty" is written across the top of the coin, with the year to the right of Lady Liberty. This image is an adaptation from the 1907 Gold Double Eagle Coin, which was designed by Augustus Saint Gaudens.

The coin's reverse side was redesigned in 2021. The new design features a profile view of a bald eagle, showing it strength and fearlessness.

For proof coins, the blank coins are hand-fed into the press. There, they receive multiple rounds of striking, more than bullion cubes, which results in crisper and more detailed images.

Proof coins are graded using the Sheldon Scale. This scale is used to assess the overall quality and appearance of the coin and offers a score between 1 and 70. While rare, coins with a value of 70 (PF70 grade) are considered to be perfect. The Professional Coin Grading Service (PCGS) or Numismatic Guaranty Corporation (NGC) are two trusted authorities that are used to grade proof coins. 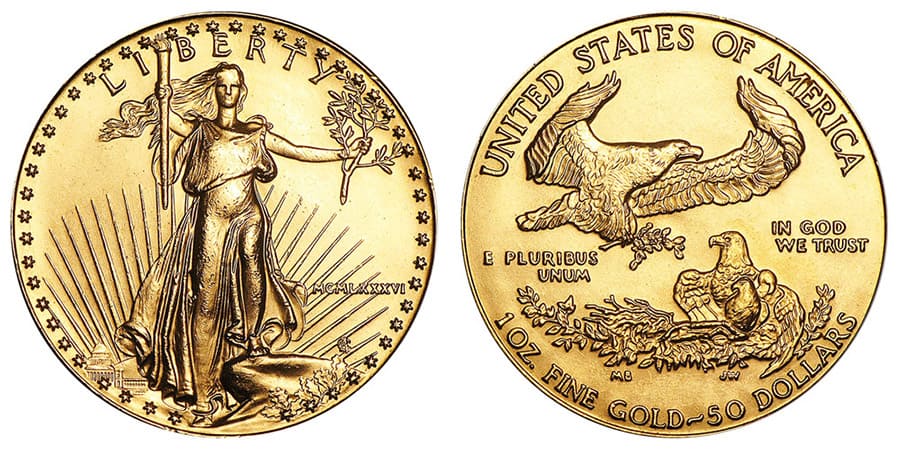 Throughout the 1800s, these gold coins were in circulation. However, in 1933 Franklin D. Roosevelt discontinued their use. In fact, an executive order he passed made it a crime for United States citizens to hold any gold (with a few exceptions).

The discontinuation minting the coins and the executive order banning the possession of gold was due to the Great Depression. Roosevelt and the government were hoping that collecting the gold would provide protections for the banks to prevent them from going into bankruptcy. Citizens who held any gold coins were required to exchange them for paper currency to help increase the gold reserves of the Federal Exchange.

With the switch to using paper currency, rather than gold, gold coins were particularly sparse through the mid-1900s. In 1964, years after the end of the Great Depression, the laws prohibiting the use of gold coins started to be withdrawn. This made it legal for Americans to hold, buy, or sell gold again. This led the way for the beginnings of the new American Eagle Gold Coin.

In 1985, President Ronald Reagan signed the Gold Bullion Act into law. This law amended past restrictions and made it possible for the United States Treasury to begin minting new gold bullion coins. Not long later, in 1986, the mint released the first Gold American Eagle Coins.

Since these unique coins are made using gold mined within the United States, they are seen as the backbone for the significance of gold bullion for the country.

Gold American Eagle Coins are now minted using 22-karat gold, silver, and copper. The coins consist of 91.67% pure gold, 3% silver, and 5.33% copper. The addition of silver and copper lead to a highly durable coin that is less likely to be damaged than other coins that may have a higher percentage of pure gold. 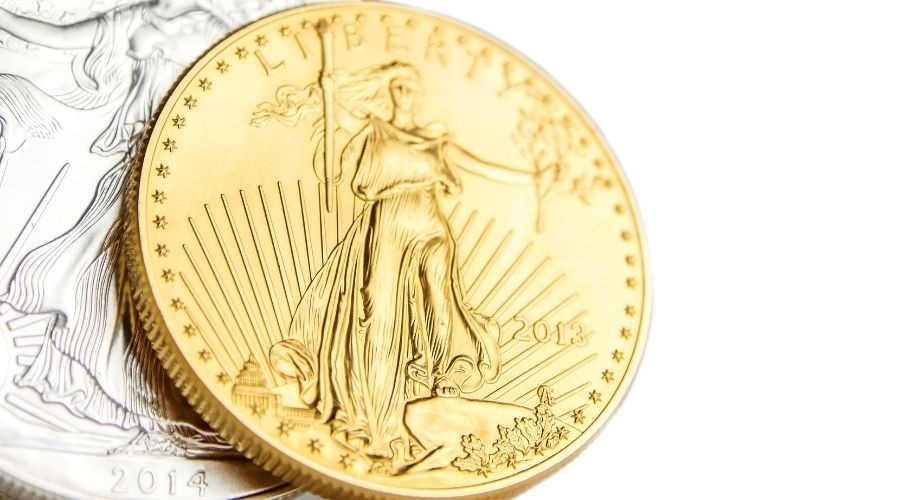 After reading about the history, design, and value of the Gold American Eagle Coin, it is likely you're wondering the best way to purchase and invest in this coin. Luckily, there are many different options available to choose from.

One option you have is to purchase Gold American Eagle Coins from a local coin dealer. This will allow you to view the coins in person and may give you more control over the mint year you receive (if this is important to you). However, a downside of purchasing gold from a local shop is that you may not always get the best price since there may be more markups.

A second choice you have is to purchase Gold American Eagle Coins from an online gold investment company. You can have the coins shipped directly to you, and since most companies offer free shipping and free transit insurance, you won't need to worry about anything happening to your coins before they arrive to you.

Once you receive your Gold American Eagle Coins, take care to arrange for secure storage for them. As we shared above, gold is a very valuable investment, and you want to make sure you are protecting your coin from damage or theft. You may choose to store it in a lockbox in your home or a safe deposit box at a bank. Even more secure than one of these options is to arrange for segregated secure storage from a trusted provider. This can provide you with peace of mind knowing that your investment is secure.

A third option for those looking to invest in Gold American Eagle Coins is to set up a Precious Metals IRA. Also known as a Gold IRA, a Precious Metals IRA is a form of a Self-Directed IRA that allows individuals to hold assets other than stocks and bonds in their retirement account. This type of IRA was first recognized by the IRS in 1974.

One benefit of purchasing gold for an IRA, is that you'll be able to take advantage of many of the tax benefits offered to IRA holders. You'll also be able to diversify your retirement portfolio to protect yourself against stock market volatility and ensure that your financially stable when it comes time to retire.

If you are interested in purchasing Gold American Eagle Coins for a Gold IRA, one of the many precious metals investment companies can help you. You can either open a new IRA or rollover an existing eligible retirement account into a Gold IRA. Once you open your new Gold IRA, you can contribute up to $6,000 each year (or $7,000 if you're over the age of 50).

How much is a gold American Eagle coin worth?

No, Gold American Eagle Coins are not pure gold. They contain 91.67% 22-karat gold, 3% silver, and 5.33% copper. While the percentage of pure gold in these coins is lower than what is found in some other gold coins, the addition of copper and silver mean that the American Eagle Gold Coin is very durable and will not be as easily damaged as some other gold coins you may purchase.

Can I hold Gold American Eagle Coins in Gold IRA?

What is the best 1-ounce gold coin to buy?

How do I sell my American Eagle Gold Coins?

If you have American Eagle Gold Coins that you are looking to sell, there are a few different ways you can do so. One way is to find a local coin shop that buys coins and bring your coins there to sell.

There are also many online services that will purchase precious metals. Many of these sites even list the price they will pay for an American Eagle Gold Coin right on their site, so you'll be able to easily compare the various options.

As a third option, you may be able to find a private buyer or collector in your area that is interested in purchasing your American Eagle Gold Coin.

How can I tell if my American Eagle Gold Coin is real?

You should also look closely at the markings on the coin. Some fakes have the word "copy" stamped on them. If you see this, the coin is definitely not authentic. Additionally, some counterfeit coins also have the wrong date. Since the American Eagle Gold Coin wasn't first introduced until 1986, if you see any coins with dates earlier than this, they're not authentic.

Some other important to look at include the font, the dimension of the coin and the edges, the diameter, and the packaging.

If you are not sure whether your coin is authentic or counterfeit, bring it to a trusted coin grader or dealer who will be able to inspect it for you.