There are few things more satisfying than the feeling of cold, hard cash in the hand. With money in increasingly electronic fashion – credit cards, debit cards, electronic stocks, bonds, and transfers – rarely does money feel like a real, tangible thing.

One thing that beats paper, however, is solid, gold coins.

Gold coins can make for a very satisfying investment, but it’s important to know what you’re getting yourself into. Investing in gold can be tricky, and aside from jewelry, gold coins are the trickiest of the gold investments, but they can have the highest payoffs, too.

When considering gold coins as an investment option, take into account these pros and cons first:

Learn How Gold Coins Can Help Protect Your Retirement Savings

Get A FREE Gold Investing Kit

Table of Contents
Buying Gold Coins
Most Popular Coins for Investment
Should I Invest in Gold Coins?

Are you feeling the pressure of economic uncertainty these days?

If so, it may be time to consider diversifying your portfolio with the addition of gold coins.

Don’t get too carried away, though – savvy investors suggest keeping 5% to 15% of your portfolio in precious metals and hard assets. Unless you’re looking mostly for retirement, typically investors need most of their portfolio to be growth-focused investments, not protective ones, like gold.

If you are looking for retirement savings, however, consider a gold IRA and place your gold coins in an investment retirement account instead of in a safe, vault, or storage facility. 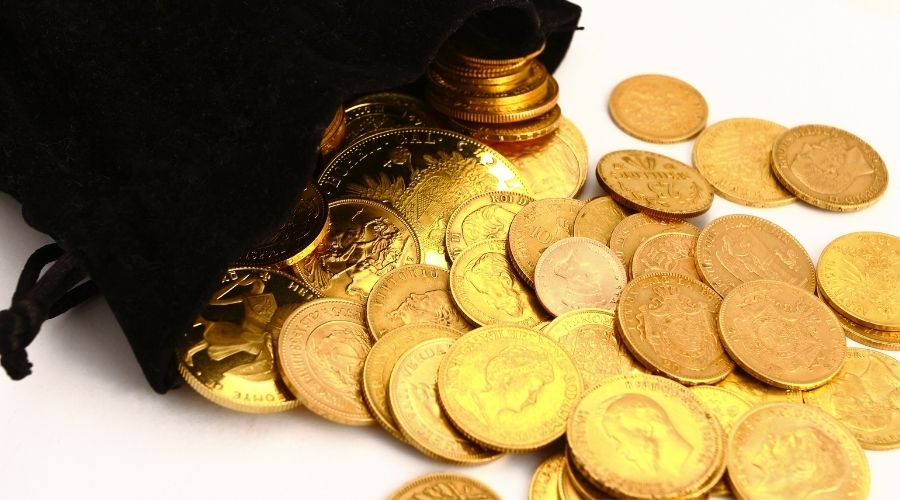 One of the first things you may notice about gold coins is their different sizes. Like bullions, which are gold bars, gold coins come in a variety of ounce and partial ounce sizes.

The ½-ounce, ¼-ounce, and 1/10-ounce coins generally run more expensive than their single-ounce counterpart. That is to say, buying a one-ounce coin is cheaper than two ½-ounce, four ¼-ounce, etc.

This is mostly due to the additional costs in minting, packaging, insuring, etc., but there are some benefits to investing in smaller denomination coins, depending on your needs.

For example, gold coins in smaller denominations may be easier to store as a failsafe when traveling or in your bug-out bag. Additionally, if the time comes that you need to be able to trade your gold for other items, it will likely be much easier to trade a ¼-ounce or 1/10-ounce coin than a full one-ounce version.

These smaller denominations may also trade at a higher price or a comparable higher premium as when it was purchased when trading at pawn shops or similar locations.

Next up, it’s important to note that there are two general coin genres in circulation – collector coins and bullion coins.

Generally speaking, gold coins to be used for investment purposes will be of the bullion variety.

These are the coins in gold, platinum, silver, and maybe palladium, and trade per the fluctuations of their precious metal counterparts.

These coins trade according to their related numismatic pricing value, sometimes exceeding thousands of dollars above the coin’s melt value or the price of the raw metal itself.

Some of the most popular bullion coins include those typically placed or stored with gold IRAs, including the American Eagles, Canadian Maple Leafs, and South African Krugerrands. Collector coin popularity varies with relative numismatic values and the demand of the collectors with market control. 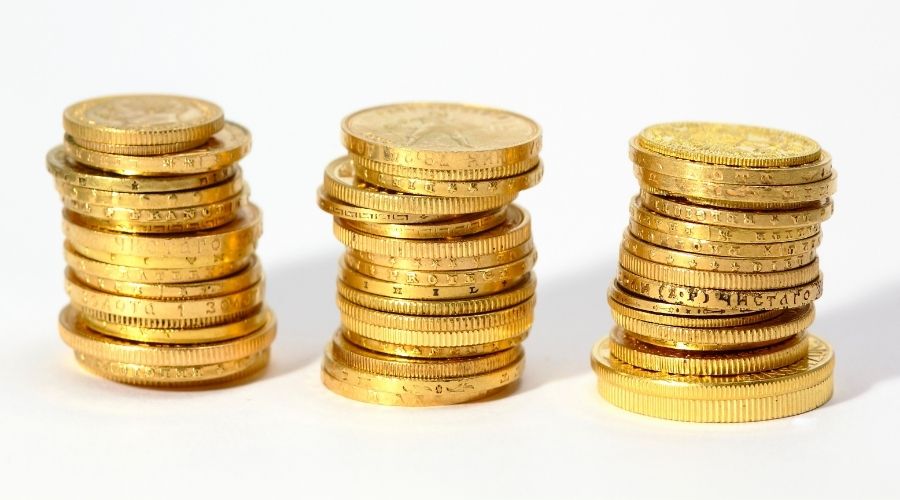 The Professional Numismatists Guild (PNG) is a nonprofit organization composed of the top bullion and collector coin dealers in the US.

The president of the PNG, Jeffery Bernberg of Willowbrook, Illinois recommends that investors and future investors of gold, silver, or platinum remain aware of the three most crucial marketplace factors.

First, investors must remain aware of their actual cost per ounce of precious metals. Gold, especially, trades inversely with the price of the US dollar. It also experiences a seasonality, trading more in some seasons than others, and at a higher market value price.

Next, the investor must be aware of the bullion value itself, versus any coins.

Coins tend to have a little bit of a premium embedded since the governments minting these coins charge a nominal fabrication fee.

The spot gold price of gold is a gold price based on a minimum of 100 ounces of 99.9% pure gold bars.

A troy ounce is a weight of measure used specifically for weighing precious metals, whereas a typical ounce weighs 28.35 grams, a troy ounce is 31.1 grams. This difference may seem nominal, but it is important to notice if you plan to trade investment coins regularly.

Gold bullion coins ranging from 1/10-troy ounce to one-troy ounce trade at 3% to 15% percent premium over spot gold prices based on the coin, the coin sizing, and the number of coins purchased at once.

For this reason, it is imperative to be aware of the current precious metals trading price on the market to ensure your coins are following typical premiums and that you get the best price possible for any given season and purchase.

The third crucial marketplace factor investors must know according to the PNG is the delivery timeliness of the purchase.

Generally speaking, the coins should be delivered within 10 to 14 days to an IRS-approved storage facility, especially if there is a large shipment of coins. If you receive your coins at the time of purchase personally, special precautions should be taken to ensure their safe transport to their final destination.

If there is ever a delay in shipping, this should be disclosed immediately by reputable dealers, otherwise, you should ensure each of your purchases comes with insurance and shipment tracking information.

Most Popular Coins for Investment

Some of the most popular bullion coins include the American Eagle, the Canadian Maple Leaf, the South African Krugerrand, and the Austrian Philharmonic, among others. 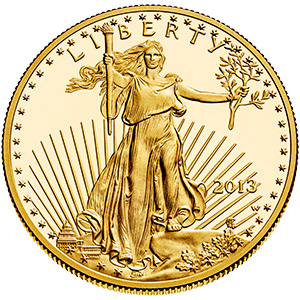 The government releases a limited number of these coins each year since 1986. Considering the number and related supply-demand rates of these coins, they make for a positive investment in most investment portfolios.

This is one coin that has stood the test of time, having first being minted in 1986.

The US government ensures that each American Eagle is of guaranteed weight, content, and purity -- consisting of 3% silver, 5.33% copper, and 91.67% 22-karat gold.

These highly liquid coins are extremely popular, bearing on the face, a strong Lady Liberty standing before the Capitol building. On the backside is a family of eagles, preparing their nest, one with an olive branch in his claws.

In 2021, this coin is scheduled for a redesign including more updated counterfeiting measures, upping the investment value of the American Eagle. 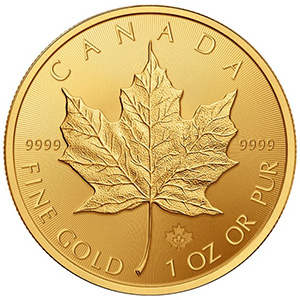 One of the few coins capable of giving the Eagle a run for its money, investment-wise, is the Canadian Gold Maple Leaf. Available in fractional sizes up to five ounces, this gold coin is made of 99.99% fine gold with a façade of Queen Elizabeth in pearls.

This award-winning coin is of Royal Canadian Mint and leads the security race with cutting-edge Bullion Digital Non-destructive Activation (DNA) technology. These anti-counterfeit measures, introduced in 2013, are one of the most significant advances in gold coin technology.

At the time of minting, the Royal Canadian Mint micro-engraves images on the face of every one-ounce Canadian Gold Maple Leaf. These images are cataloged as high-resolution photographs, stored on servers.

To verify the authenticity of each coin, special readers are authorized to distributors and dealers for the real-time verification of any one-ounce gold or silver Maple Leaf produced after 2013. 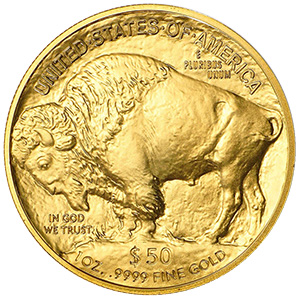 This U.S. minted coin was released in 2006 specifically to compete with the Canadian Maple Leaf, the Austrian Philharmonic, and other similar 24-karat coins.

The coin should be handled with extreme care to avoid scuffs and marks.

Its purity rivals that 99.99% of the Canadian Maple Leaf, making it a much softer coin than the American Gold Eagle.

It is a highly patriotic coin, being minted in the US, on gold mined in the US, baring a proud Native American Chieftain on the front side and a majestic profile of the American Buffalo on the reverse. 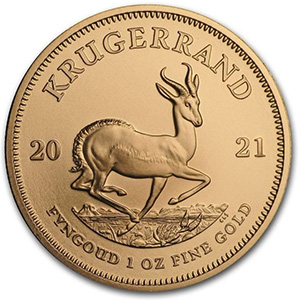 The South African Krugerrand is a coin of specific and unique history.

The coin is named after the minting company, the Rand Refinery, and the first president of South Africa, Paul Kruger.

The presidency of Paul Kruger lasted from 1883 to 1900, including historically significant events such as the founding of the Durban Deep Mine, the Witwatersrand Gold Rush, and the founding of one of South Africa’s largest cities, Johannesburg.

Before the 1970s, the United States was one of the largest markets for the Krugerrand, as US consumers could only purchase and own foreign coins and bullion, but during the 1970s and 1980s, apartheid laws made the Krugerrand illegal to import.

Before this time, at its largest market share, the Krugerrand made up around 90% of the global coin exchange, making it one of the most traded coins in the world. The Krugerrand is still a very well-known and highly traded coin, making it a great investment option for novices and experts alike.

The South African Krugerrand carries a very distinct coloring, being composed of 91.67% gold and 8.33% copper. This gives it a copper-ish hue to the front, but better than average durability for delivery, storage, and transport.

A long-bearded, left-facing President Paul Kruger covers the coin’s front and the national animal of South Africa, as well as the namesake of the country’s rugby team, the springbok, is displayed on the rear, in a graceful mid-leap. 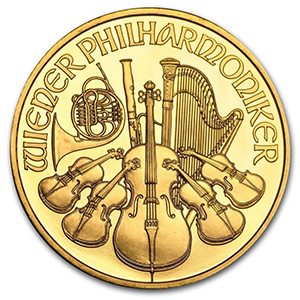 Just one year after its release in 1989, the Austrian Philharmonic, or the Vienna, had become the best-selling coin in Europe.

This was right around the time that the impositions in South Africa made it difficult to obtain and own South African Krugerrands, so the Vienna filled the resulting hole in the gold market.

The Philharmonic quickly became a favorite coin of investors and music lovers, being the first one-ounce coin available in Europe for exchange. These uniquely displayed coins are minted at 99.99% gold purity, making them another one of the softer coins.

Although they are produced at the typical one-ounce and fractional-ounce weights, the Austrian Philharmonic also comes in a smaller 1/25-ounce coin, and at much, much larger weights, like the 20-ounce gold coin and the aptly-named “Big Phil”, a whopping 1,000-ounce coin.

The Big Phil isn’t regularly produced though, it was instead created to commemorate the 15th anniversary of the Vienna, and only 15 of them were minted. The celebratory coin had a nominal value of around €100k (~$111k) and contained 31.103 kg (68.5 lbs) of pure gold.

Each Vienna features a world-famous pipe organ of the Vienna Musikverein’s Golden Hall, the main stage for the Vienna Mozart Orchestra. On the reverse side of the coin is an assortment of orchestral instruments including the cello, harp, Vienna horn, and bassoon.

Should I Invest in Gold Coins?

If you are willing to perform your due diligence, as well as maintain the gold coins in safe, secure storage outside the home, gold coins make for excellent investment options.

Consider making coins a part of your financial portfolio’s 5% to 15% diversification investments, or as an economically savvy option for retirement, in a gold IRA.

Learn How Gold Coins Can Help Protect Your Retirement Savings

Get A FREE Gold Investing Kit